Here is an interactive MAP of all Frome shops.

The old A5 version, prepared for printed & stapled copies, is now out of date but could be revived. See  pages (or menu above) for websites, phone & emails;

This website was created for the town by Katy Duke, who normally designs buildings & makes thermal roman blinds.

Why were the pavements widened in Market Place? Who messed up the bus bays? Which Council was responsible?

There are so many misunderstanding about why, who & when works were done to Market Place in Frome, so here I put the record straight. A letter to the Frome Times dated 5th July 2018 (below) was the final provocation as it was just as wrong as the many other letters, Facebook comments & conversations over several years.

History – back in 1996, even before I worked at the District Council, I was designing solutions to the Market Place problem! A radical suggestion to move the Boyle Cross & put a tight bend in the road at the bottom of Bath Street was ultimately too extreme but it stayed in my mind as a positive improvement. So when I became Regeneration Officer for Frome I worked hard to convince the County Council (as Highway Authority) that the narrow pavements were dangerous and there was too much space given to vehicles instead of pedestrians. This was supported by the Frome Task Force (see this article), a collaboration between County, District & Town Councils – I was employed by the District Council to help regenerate Frome.

END_OF_DOCUMENT_TOKEN_TO_BE_REPLACED

In the early ’90’s Frome began to decline, shops became vacant and shopping habits focussed around the ‘weekly shop’ rather than frequent town visits. This made Frome, and especially Catherine Hill, a less popular place to shop. In 1992 the Cattle Market moved out of town & Sainsbury’s were given planning consent to open a large supermarket on the edge of town and things slid further.

The County, District & Town Councils’ put their collective thoughts together & came up with a plan. They started a Task Force, refurbished the central car park & appointed a Town Centre Manager. This sparked a revolution in the Catherine Hill area, with vacancies dropping from 60% to 15% by 1998. Together with building repair grants & joint effort with the authorities and Chamber of Commerce, Frome gradually became a lovely place again. Catherine Hill shifted from general shops in the early 90’s to vacancies by 1994, a centre for collectibles & antiques by 1999, then a moved to art & crafts in the early 2000’s & now a place for retro goods, cafes, gifts & crafts.

This didn’t happen because a few Londoners recently came to Frome, it has been a concerted effort by local people willing to put their money & time into its regeneration.

A list of key publications alongside names of Mayors & political power.

The District & County Council together with English Heritage pumped £1.7 million into building repair in Frome between 1988 and 2006. Despite having 373 Listed Buildings the town was dilapidated and it was difficult to find owners willing to refurbish buildings & support retail tenants. With over £1 million of additional grant aid & ‘planning obligation’ funding came a new era for Frome and repaired buildings gained reliable and interested retail tenants. Town Centre management (with a further £0.75 million of ‘town centre fund’) supported these nascent businesses and helped to promote the town and create shopping guides and improved public spaces and paths. The Black Swan was refurbished & created craft workshops. The Cheese & Grain was bought by the District Council, repaired & passed on to the Town Council to manage & refurbish. The riverside path by the Cheese & Grain was cut under the railway bridge and a whole new side to the town was opened. The National cyclepath helped fund a path through Rodden Meadows & out to the Station via Willow Vale & many outlying residences became better connected to the town centre.  Market Place was enhanced with wider pavements. The Museum regenerated, moved to a more accessible floor and gained funding. John Peverley wrote a great piece on the regeneration of Frome here.

All these projects thrived because of the long-sightedness of the District Council, supported by the Town Council. From 1995 – 2008 there were wide-reaching annual action plans agreed by the community. Sadly the District Council now suffers from a severe lack of staff & funding & the baton has been passed to the Town Council. A lull in activity around 2008 has since been countered by a thriving Independent Town Council in 2011.

Do you shop in Frome? Or is there a reason why you don’t? Could you help our understanding of Frome shopping by answering a few questions? Visit https://www.surveymonkey.com/s/KZTJGVC and answer 10 simple questions. 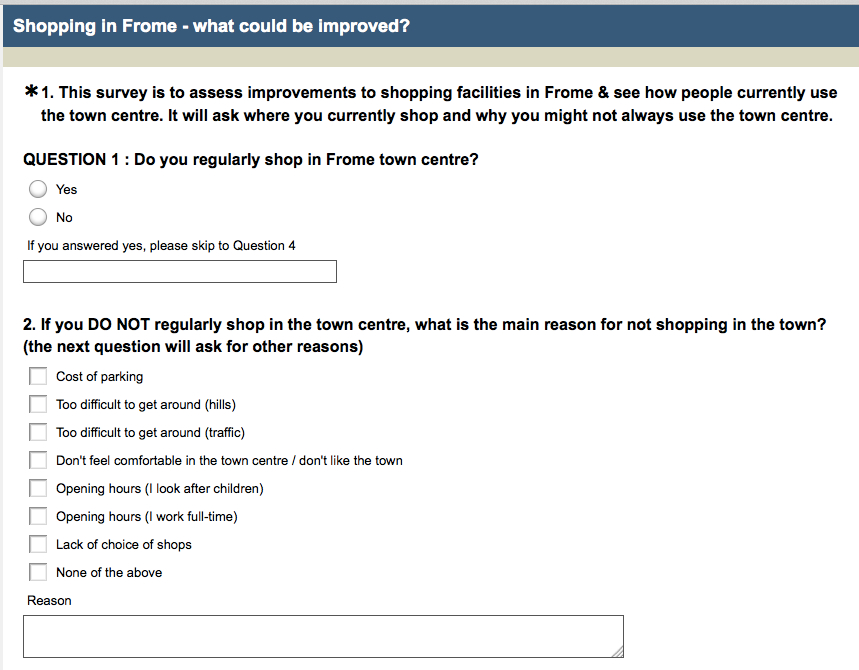 Results can be found here.

How much pork is in your sausages? Are cheap sausages more fatty than expensive ones? What is in a ‘value’ sausage? What about butchers sausages, are they better quality? How much do they cost? Note, this article was written in February 2013.

According to the BBC website sausages are “Typically a mixture of minced, ground or chopped meat that is seasoned and stuffed into a casing. The casing is traditionally made from animals’ intestines – sheeps’ intestines for small sausages such as chipolatas, pigs’ intestines and ox intestines for larger sausages.”

I checked out what I could buy online from Tesco. I checked their pork content, their fat content and compared prices. Here is the result;
Tesco have lots of different sausages available, I counted 33 different types (some were the same type but different pack size). They range in pork content from 37% to 97%, and in price from £1.39 per kg (‘Everyday’) to £9.20 per kg (ie. over six and a half times more per kg). END_OF_DOCUMENT_TOKEN_TO_BE_REPLACED

We need another supermarket, it is our right; we want choice!

Why is this desire & demand so damaging? Why should a town centre extension be built around a desire to shop rather than a need for a mix of uses to create modern flexible workspaces, leisure uses and good quality (hard & soft) public spaces? Why is a crucial site in our town centre seemingly to be determined by landowner greed and developer greed rather than an approved ‘seamless extension’ plan? Why is this proposal being described as our ‘last chance’ for a site which has been totally controlled by one key landowner for many many years?

Some people think that a huge supermarket is the only way for the Saxonvale site in Frome to be developed. But it isn’t. The site has a well-formulated and formally agreed planning brief. As recently as 2009 a planning consent was given for the site to be developed for a mixed use scheme which provided between 267 and 869 jobs* (lets say around 600). This failed the final hurdle of site assembly, presumably as the landowner wanted too high a price for the site.

So we are now faced with a scheme which is far more profitable for the landowner (& developer) but at what cost? Far fewer jobs (around 300 are suggested but no detail), most of them presumably relatively low-skilled supermarket staff (not the creative industries which are currently demanding space in the town). Far more damage to the environment, destruction of trees and development hard up against the river edge, which is currently woodland. Poor public spaces which have no residential overlooking so are likely to be dead spaces in the evenings. A huge monolithic box on legs, totally disconnected from the surrounding natural ground level or streets, devoted to consumerism – selling stuff we can already buy in Frome, mostly. So much pressure on surrounding roads that log-jams will be commonplace and trade will NOT be diverted from the existing edge-of-town stores.

And all this is supported by people who write to the paper about the ‘haemorrhage’ of trade to other local towns (not according to statistics), demanding the perfect balance of shops to cover the missing sectors (mens clothes, school uniform, shoes), as if the retail sector can be controlled by desire alone rather than commercial viability. OK, so its not a perfect situation where you have to visit Trowbridge once every six months for something vital, but would you redevelop a town centre extension on that basis?

Would you jeapordise the current thriving but delicate balance of the town centre?

* based on BCO densities 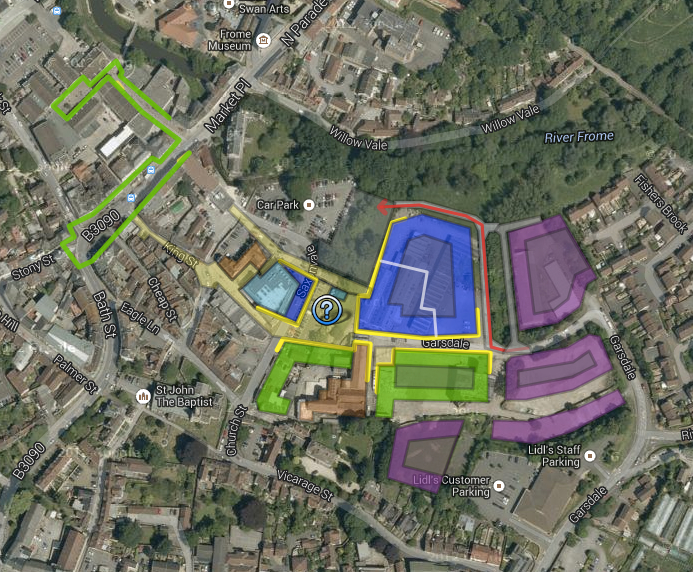 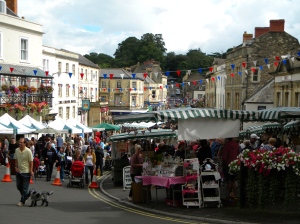